In Memory of Jerry Wallace

Jerry " Bubba " Wallace joined the Midland County Sheriff's Office on January 30th, 1986. As is customary Jerry started his employment in the Detention Division and steadily worked his way up to the Patrol Division and finally to the Criminal Investigation Division. Jerry was an excellent Criminal Investigator and helped solve many cases. Jerry was a United States Army Veteran and was a very loyal and dependable employee. A bear of a man, Jerry was born and bred in Texasand there was no doubt about that when you talked to Jerry. Jerry had the uncanny ability to befriend anyone and everyone he came in contact with. Jerry was a pleasure to work with. Jerry " Bubba " Wallace passed away on March 17th, 1995 of a massive heart attack. 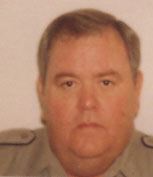