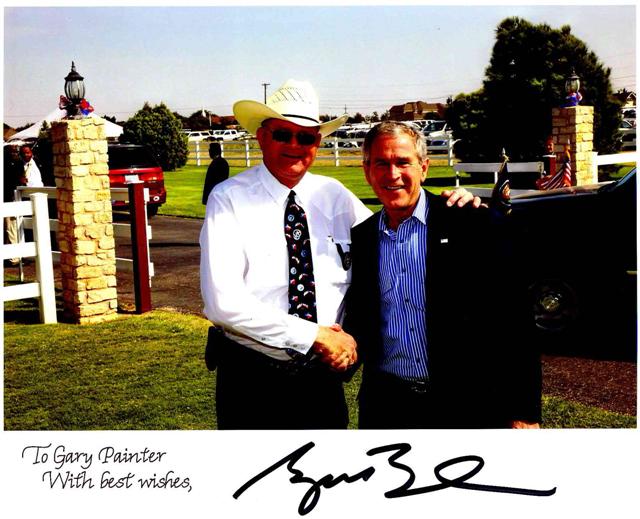 On September 1st, 1966, Sheriff Painter enlisted in the United States Marine Corps and served two tours of duty in Vietnam the first tour along the DMZ and the second outside of Danang. Distinguishing himself on the battlefield, Sheriff Painter earned the National Defense Service Medal, the Vietnam Campaign Medal, the Vietnam Service Ribbon with 6 devices, the Presidential Unit Commendation, and the Vietnam Cross of Gallantry. Honorably discharged from the United States Marine Corps with the rank of Sergeant on Aug 31, 1970 Sheriff Painter embarked on his law enforcement career by hiring on with the Texas Department of Public Safety as a Highway Patrolman in September 1970.

Department, and finally came home to stay with the Midland County Sheriff's Office in 1982. Working his way up through the ranks from the Detention Division to Criminal Investigations to Patrol Lieutenant, Sheriff Painter ran for and took office as Sheriff of Midland County on January 1, 1985 and has never looked back. View the Resolution for Appointment as Sheriff (JPG).

A born leader of men, Sheriff Painter organized the first multi-jurisdictional narcotics task force in West Texas, organized the Midland County Sheriff's Office Crisis Intervention Unit, was the moving force in creating the Permian Basin Peace Officers association, and was one of the original founders of STAR ( Sheriffs of Texas Agreed Response ) which has developed into an integral component of many communities plans in their efforts to combat terrorism and weapons of mass destruction incidents.

A member and leader in numerous civic clubs, Sheriff Painter is a Master Mason, a staunch Republican, a devout Baptist, and served as past president of the Downtown Lions Club from 2003 to 2004. Sheriff Painter's hard work and leadership has been recognized by numerous

organizations including the 200 Club, who awarded Sheriff Painter their Officer of the Year award for 1988 and 1991. Recognized for his leadership abilities, Sheriff Painter is a past President of the Sheriff’s Association of Texas with a lifetime membership, he also serves on the Legislative Committee and Technology Committee of the Sheriff's Association of Texas, where he combats proposed anti law enforcement legislation every day, along with his other duties. Sheriff Painter is also currently on the Board of Directors with the Western States Sheriff’s Association. In 2016 Texas Governor Greg Abbott appointed Sheriff Painter as a Commissioner on the Texas Department of Motor Vehicles after serving 7 years on the Texas Commission on Jail Standards, having been appointed by former Texas Governor Rick Perry.

A happily married man for 39 years to his wife, Patsy, and a devoted father, Sheriff Painter has 5 children, 7 grandchildren and 4 Great grandchildren.